The Statue gets Rededicated

West Liberty Statue of Liberty replica rededicated after getting refurbished 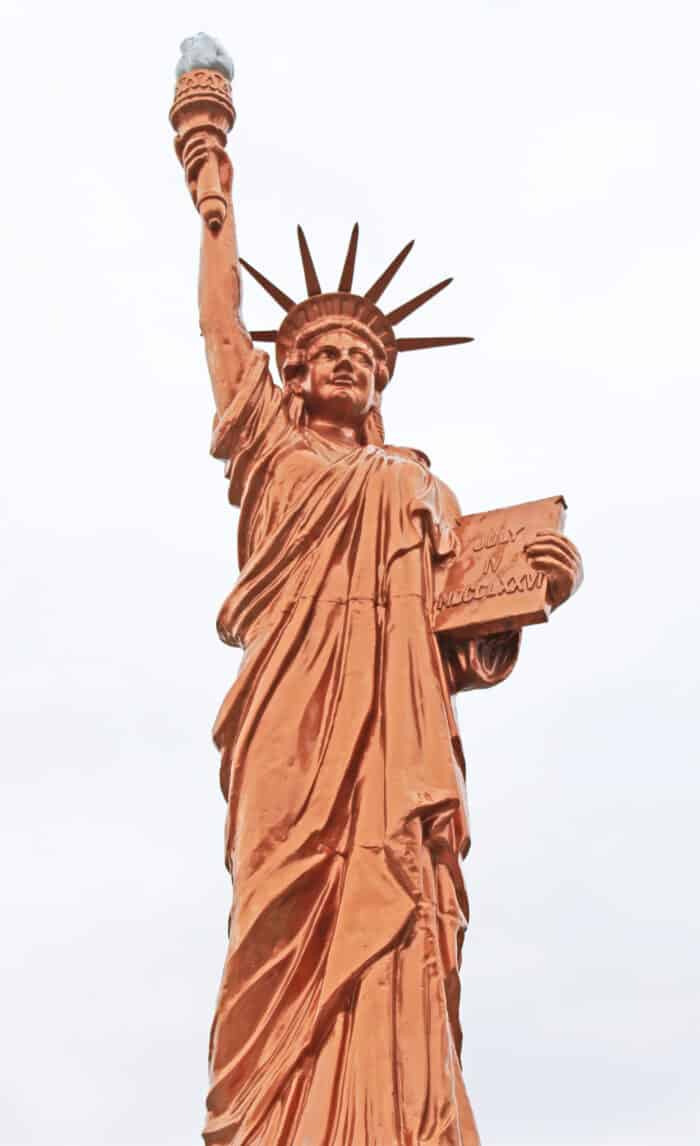 On Nov. 21, 2021, Chuck Newcomb, who originally helped raise the funds for the replica as a Boy Scout, spoke during the rededication  of the Statue of Liberty ceremony after the annual Chamber organized Holiday Open House. Ken Brooks, Director of WeLead, also spoke on behalf of the Boy Scouts of America.

The bronze replica of the Statue of Liberty was originally donated to the City of West Liberty by the local Boy Scouts in the early 1950s. The Boy Scouts used fundraising to purchase our local Lady Liberty as part of a larger initiative by the national Boy Scout organization to “Strengthen the Arms of Liberty” across the United States.

On May 21, 1950, the statue was dedicated by West Liberty Mayor Harold O. Keele in front of several hundred Boy Scouts and the community, among those Boy Scouts was a young Charles (Chuck) Newcomb.

The statue stood proudly in front of city hall for 70 years. But due to a deteriorating base, the City of West Liberty removed the 8 ½ foot bronze replica during the summer of 2018 in order to keep it from crumbling and falling over.

Afterwards, Chuck stayed vigilant about the return of the statue. If you don’t know, Chuck is a valuable asset to West Liberty, including serving the West Liberty Fire and Ambulance Department for 40 years. He made sure that the statue was never forgotten while it was down.

Speaking of which, thanks to the several contributions listed below the statue was restored and returned to its original location in front of city hall on top of a 6-foot base. Each of the four sides of the new base contains one of the original four plaques that commemorate the City of West Liberty, the Boy Scouts of America, the West Liberty Volunteer Fire Department, the United Methodist Church, the Mansell Phillips Post 509 American Legion Auxiliary of West Liberty and Robert E. Lewis, a West Liberty native who served in the Korean War and went MIA off the island of Japan.

The City of West Liberty is honored to see the statue returned to its rightful place and would like to thank Chuck Newcomb and his family for being a part of the return and eventual rededication of the Statue of West Liberty replica.

A Special Thanks to: