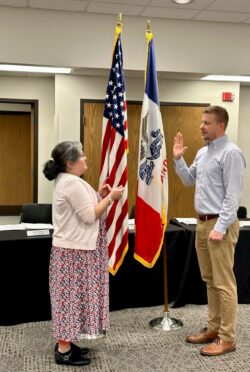 Ethan Anderson was nominated and approved as Mayor of West Liberty on Monday, Oct. 24, by the city council in a unanimous 5-0 vote during a special city council meeting.

“I have all faith in the people that we appointed as a council and our appointment for mayor if passed,” stated Council Member Dana Dominguez before the vote.

The mayoral seat had been vacated by former Mayor Katie McCullough when she announced her resignation at the end of a regular city council meeting last September. Mayor Anderson will fill out the reminder of the term, which ends Dec. 31, 2023.

Mayor Anderson has a family and is a business owner in West Liberty. He was one of two community members to volunteer to be nominated, the other was former mayor Bob Hartman.

Afterwards, the city council held a special training session for its members. The next regular city council meeting will be held Tuesday, Nov. 1, in the West Liberty Community Center.